How to Unclog a Kitchen Sink 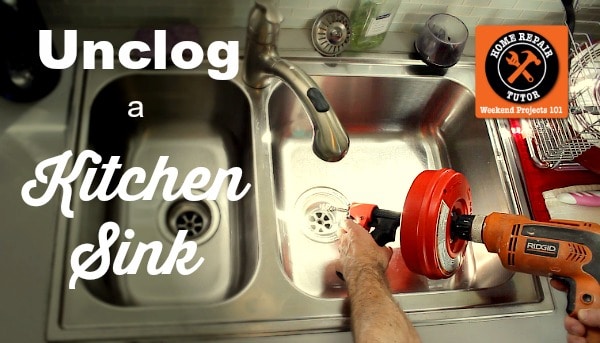 After 5 minutes you’ll likely never have to call a plumber for kitchen sink clogs.

A few weeks ago my tenant’s kitchen sink stopped draining.

My knee-jerk reaction was angst, but then I realized this was awesome!

Anyone can do this repair…after learning a few skills.

Today I’ll show you everything I did to fix this common problem.

I guarantee you can do this, and you’ll like the tool giveaway.

How much do you think a plumber charges to unclog kitchen drains?

Although I have to admit I don’t actually know.

Primarily because I’ve never paid someone else to solve this problem.

And that was with me setting up video equipment!!!

Here are the supplies you’ll need

Where do you start with a clog?

In my case both sinks in the kitchen were backed up.

This indicates a few different things.

The first culprit could be a clogged p-trap.

Place towels and a bucket just underneath the p-trap.

Here’s where things can go wrong, so pay attention.

If the clog is in the p-trap you’ll see a slow trickle of water.

Lack of water means the clog is higher up in the drain assembly.

Loosen the second p-trap slip nut and lower the p-trap into the bucket.

If the p-trap holds the clog, all the water in the kitchen sink will rush down the drain into the bucket.

It can get messy, I’m not gonna sugar coat it.

As a side not, my BIGGEST recommendation when it comes to clogs is to NEVER use chemicals.

Tap the p-trap against the side of the bucket and remove any solids using paper towels.

I show you this in a separate bathroom sink tutorial I did awhile back but the tip remains the same.

You can also push the paper towels through the p-trap to force out the yucky stuff.

What if the p-trap didn’t have a clog?

Check if the clog is in the wall pipe or higher up in the sink drain.

In this tutorial you see my clog was higher up than the p-trap.

Water wasn’t draining because of a marshmallow type clog in the drain piece.

I actually didn’t need to do much to remove the clog!

Imagine if you had a similar situation but had to pay $75, yah that would suck.

If all the drain pieces are clear and you still have a clogged drain you’ll have to use a hand auger.

This tool will help you mechanically clear out the wall pipe.

Ridgid makes some of the best plumbing supplies in the world.

Their Power Spin hand auger is pretty awesome and you can’t go wrong buying one.

Using it once justifies the $40 cost.

Watch my video tutorial to see how to use the Power Spin, unclog your kitchen sink in 5 minutes and put the pipes back together without any leaks.

I did have one mishap while making this tutorial, I should have used a 5 gallon bucket because the water almost overflowed!!

How to Unclog a Kitchen Sink

As you can see, learning how to unclog a kitchen sink is straight forward.

Having the right tool can help a lot.

Thanks as always for reading, watching and making our Do-It-Yourself community a fun place to learn new skills.