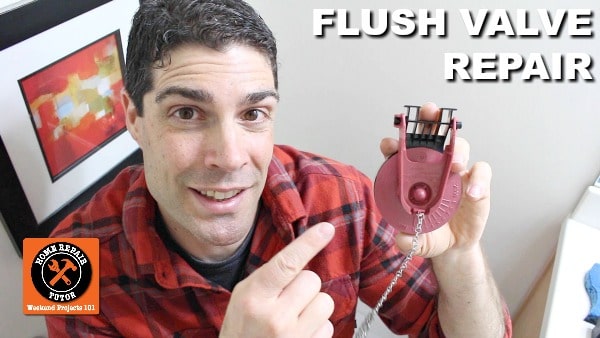 Running toilets waste water and can cost lots of money. Many solutions exist and today’s tutorial is one option. It specifically addresses faulty flush valve seats.

When the flapper lowers back down onto the flush valve seat it creates a seal and allows water to fill the tank via the fill valve.

But sometimes the flush valve seat can corrode over time and this causes water to leak prematurely into the flush valve. That in turn causes the toilet fill valve to constantly run.

Our tutorial shares how to use Fluidmaster’s Flush Valve Repair Kit to solve this problem.

Here’s the deal, corroded flush valve seats can only be fixed one of two ways. The first option is replacing the entire flush valve which means taking the tank off the bowl.

Frankly this can create a lot of problems if the toilet is a later model, e.g. 30 to 50 years old. It could be hard finding the correct flush valve kit. In addition, there’s always the risk of cracking the tank or bowl during re-installation. And that could lead to buying a new toilet!

Inspect the flush valve and if the seat isn’t smooth chances are high that the running toilet is due to an improper seal between the flapper/seat.

Another common issue with running toilets is the fill valve.

That’s also easy to swap out with this short tutorial.

Let us know if you have any questions, we’re happy to help.