How to Install a New Door Lock 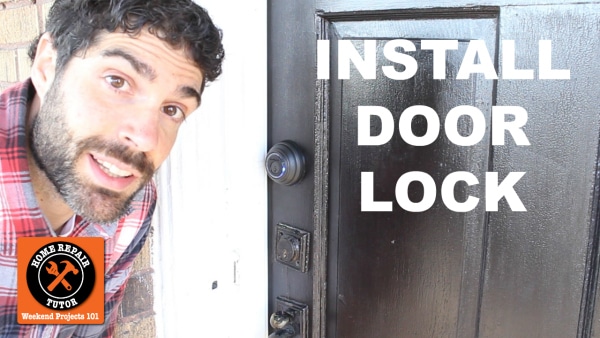 Learning how to install a new door lock is important.

Especially if you value your home.

Here’s the deal though, keys get lost.

Whether it’s your kid, husband or tenants…keys ALWAYS get lost.

I recently fell in love with Kwikset’s Kevo smart lock.

You’ll see why in today’s tutorial.

Our first house got one.

Plus I use Kwikset door locks for my rental homes, too.

They’re easy to install and have never let me down.

When Kwikset approached me to do a sponsored tutorial it was a no brainer.

(Btw, sponsored posts help keep the lights on if you get what I’m saying)

The Kevo smart lock is very similar to other deadbolts.

But why is it better than a standard door lock?

It turns your smart phone into a key.

This is totally awesome.

No more worrying about keys.

Here’s how it works:

Have your smart phone in your pocket or purse then touch the Kevo.

The Kevo smart lock then opens.

Okay, before we dive into the tutorial you need these supplies

Let’s do this installation step-by-step.

Score it with a utility knife.

That way, when you pull the old deadbolt it won’t ruin your door’s paint.

Which would stink big time.

Remove these bolts with your drill, impact driver or screwdriver if you like taking your time.

Two screws hold the deadbolt mechanism to the door.

Step 2: Get Familiar with Kevo

The Kevo works with Android or Apple devices.

Personally I’m an Apple guy, but only by a smidge.

So it communicates via your smart phone’s blue tooth and the Kevo app.

One of the best features of the Kevo is you can share eKeys.

What the heck does this mean?

If your friend, family member or contractor needs inside your house you can send them an eKey.

As long as their smart phone is compatible they can use it as a key to unlock the Kevo.

The Kevo also accepts a traditional key if you’d prefer that route.

Or if you lose your smart phone, ouch!!

The Kevo comes with

Also grab the dimension from the center of the hole to the edge of the door.

If your door has a mortise choose this latch

If your door doesn’t have a mortise choose this latch

Position the latch in the ‘Up’ position and adjust the length by twisting.

It’s a standard practice to have to adjust the length of the door latch.

I always have trouble with this step because I’m mechanically challenged.

Slide the latch into the door.

Test it with a screwdriver to make sure it retracts and extends smoothly.

If you have trouble with this step let me know in the comments, I have a tip.

Secure the latch to the door with screws.

Measure the thickness of your door.

This determines the screws you need for the deadbolt.

Position the orientation of the deadbolt stem so that it fits through the interior mechanism of the latch.

Slide the wires of the Kevo under the latch and press it flush with the door.

Position the bracket on the back of the door.

And slide the wires from the Kevo through the bracket.

Feed the bolts through the bracket and start them by hand.

This is important because you don’t wanna strip the bolts.

Then use a screwdriver to completely tighten the bolts.

The turn piece for the back of the Kevo should be in the vertical position.

It’s tempting but don’t put the batteries in yet.

Plug in the cables from the Kevo to the electrical components.

And tuck them into the housing per the directions.

My video has all the details on this step.

Don’t position the cables anywhere near the mounting holes.

Because the screws will pinch the wires and possibly ruin the electrical connection.

Position the back of the Kevo against the bracket and secure it with the tiny screws provided.

They are tiny little buggers.

Now you can install the batteries in the battery pack and slide it into the back of the Kevo.

Hold the program button while doing this.

The light indicator on the housing should turn green.

At this point double check the operation of the deadbolt.

It should move back and forth relatively smoothly.

Close the door and test the operation of the deadbolt to ensure it works.

Put the cover plate on the back and you’re done!

The Kevo comes with a re-keying tool.

Meaning you can use an existing key to open it the traditional way.

The Kevo comes with a key fob.

You can use this instead of your smart phone to lock or unlock it.

Touch the Kevo and then activate your key fob.

You can place the fob with your other keys.

When the fob is in your pocket you simply touch the Kevo and it will lock or unlock.

Upload the Kevo app to your smart phone and setup an account.

The setup is pretty darn easy.

When you’re done the smart phone will act as your key.

Have your smart phone in your purse or pocket and touch the Kevo smart lock.

The deadbolt will lock or unlock automatically…awesome sauce.

I made a fun step-by-step video for you.

Watch the video to find out how to enter…just for fun count the steps in the beginning, haha.

The Kevo smart lock solves a huge problem for me and that is lost keys.

Plus, if someone needs to get into the house I can send them an eKey.

Let us know if you have any questions about the Kevo.

Thanks for  reading, watching and being part of our awesome DIY community.