How to Build a Rustic Cooler 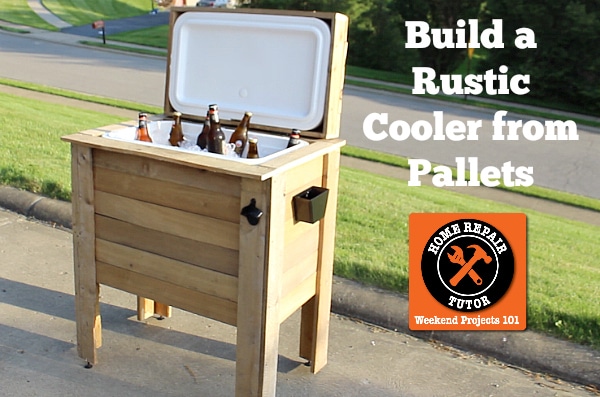 If you want to learn how to build a rustic cooler from pallets then I’ve got a great project.

And the coolest part is that I did it using only one type of saw.

There are great tutorials on the web but they all require a ton of tools.

I know you might not have a table saw, router or miter saw – which can cost hundreds of dollars.

That’s why I made this tutorial. To show you that you can build a rustic cooler with only a few tools.

I used a drill & impact driver plus the Dremel Ultra Saw.

I’m super excited to show what the cooler looks like and I’ve got a way cool surprise at the end!!! 🙂

Supplies for Building a Rustic Cooler

Some of my fans know I make a weekly trek to Lowe’s for supplies.

This past Saturday I discovered the Ultra Saw while sauntering past the tool section (think Shaggy from Scooby Doo).

After checking out the description I was all in and decided to get one, specifically for this project.

You’ll see why I fell in love with it.

After you read or watch the tutorial you’ll be able to make the cooler in one day. Okay, maybe a day and a half if you take pool breaks like me.

How to Prep for a Rustic Cooler

Here’s what I discovered:  call your local landscape supply company to get free pallets.

They’re super nice and willingly to part with pallets.

Big box stores get paid $15 to $20 for their pallets and this is why they don’t give them away.

Pick out 5 to 8 pallets whose wood slats are in good shape. The slats on my pallets were 5/8 of an inch thick.

Either hose the pallets down or power wash them.

Power washing the slats made a huge difference in the appearance.

If you can, choose pallets like the ones in the picture below. Slats were attached to only two boards.

Remove the slat by sawing it off on either end.

You can use the Ultra Saw to saw off any stubborn nails or screws, too (pretty sweet).

I used a 50 quart Igloo cooler for this project and dry fit the slats to see how many I’d need to cut.

Remove all the hardware from the cooler: handles, wheels, hinges, latches, etc.

I’m not the first person to build this kind of cooler.

Heck, I don’t even think mine is the best.

But I can promise you it’s the simplest to build.

Many tutorials use all sorts of tools that cost upwards of $1000.

So I decided to make a cooler that only required a few tools.

You need to build 4 legs. I did this by cutting 8 slats to 33 inches in length. Attach 2 slats together at a 90 degree angle using wood glue and wood screws.

Pre-drill all your holes so that the wood won’t splinter.

Now measure the height of the cooler and figure out how many slats you need – in my case it was 6 slats for each side for a total of 12 slats.

You’ll want enough slats to cover the entire height of the cooler plus an extra 4 to 5 inches.

Cut those slats to size using the Ultra Saw then place two legs on the ground.

Here’s a little tip: look at how the legs are positioned on the ground and make sure they’re all oriented in  the same fashion. This is a small aesthetic preference but will affect the look of the cooler once it’s finished.

Since my slats were 5/8 inches thick I used 1 1/4 screws so that the screws wouldn’t protrude through the face of the slats.

I initially used 1 5/8 inch screws but that didn’t work out so well!!! The ends of the screws went through the slat faces. I want people to get a beer from the cooler NOT TETANUS.

Do the same thing to build the other side of the cooler.

Cut one front slat to size and dry fit it between the two sides to check the cooler will fit.

Once you’re sure the front slat measurement is accurate go ahead and cut 12 slats, 6 for the front and 6 for the back.

Attach 6 slats one on top of the other to the left and right sides. Add wood glue, pre-drill two holes on each side of the slats and screw them to the legs just like you did with the sides.

When you’re done you’ll have the rustic cooler frame. Dry fit the cooler into the frame. It will be nice and snug.

The next step is to build a little shelf for the top of the cooler frame.

Making the Shelf and Lid

Keep the cooler in the rustic frame and place the frame on a flat surface right side up.

You’re gonna build a little shelf on top of the frame so that the lid closes easily and the frame looks a bit nicer.

This is super easy.

Measure the distance between the outside edges of the front legs. Cut a slat to this size.

Do the same thing for the back legs.

Add glue to the top ledge. Place the front and back slats onto the top of the frame. Pre-drill holes into the slats and screw them down.

Measure the distance between the front and back slats. This will give you the measurement for the side portions of shelf. Cut those slats to size and attach them to the cooler frame like you did in the previous step.

I wanted the side shelf pieces to be slightly skinnier than the front and back.  So I made a rip cut using the Ultra Saw. It worked out beautifully.

With the shelf in place, you can frame the lid.

I placed the cooler lid on top of the cooler and basically built a box around it.

To see how I did this and gave the rustic cooler adjustable legs watch my video tutorial.

I’m super stoked about the legs since our patio isn’t exactly level. It’s a small detail that other rustic coolers didn’t have and I thought it’d be a sweet option. Plus I added a few other cool accessories.

Our tutorial showing how to build a DIY gel fire pit is also awesome – and easy!